There are two leaders on the market of TVs – Sony and Samsung. Both companies produce good equipment, characterized by reliability and high quality. There are differences between models of brands of medium and high price ranges that require more detailed analysis.

In budget panels of brands one type of matrix is used – LED (liquid crystals). Almost always the technology works in conjunction with LED-backlight (LED). However, the methods for manufacturing liquid crystal matrices, as well as illumination, are different.

Samsung often choose PVA- and PLS-screens. The latest technology is used in cheap screens, the first – in more expensive ones. PLS-matrixes have narrow viewing angles, so TVs with these screens are not suitable for large rooms, where people can be in different corners of the room – the picture will be distorted for them. PLS-matrices will always lose PVA screens in color coverage.

As for Sony, the Japanese brand do not use cheap matrices on its TVs, so you will not be able to find a Sony model with a PVA or PLS display. Company prefers to install VA-matrices of certain varieties. With good backlight, such displays show high-quality colors, especially black ones. Viewing angles are close to maximum.

And although Sony models with VA-matrices are more expensive, most Samsung TVs show better picture. This is possible due to some of the digital imaging technologies that Samsung uses, as well as a better implementation of Edge LED or Direct LED backlighting. However, the Japanese also use HDR technology, which expands the dynamic range and allows you to see the details in the picture in bright and dark areas.

So Samsung gets better software technologies – they make picture looks great even on an inexpensive matrix. Sony traditionally sets expensive matrices, which increases the cost of the TV, but in practice it is hard to find an improve color rendering.

In expensive models, a fundamentally different type of matrix is used without traditional illumination – all the pixels glow independently. It gives certain advantages: saturation and deep black color, as for the showing black the pixel does not glow at all (in LED-models the black pixels are still highlighted).

The greater success in this respect has been achieved by Sony with its OLED technology. However, it is very expensive and difficult to produce, so the displays of the Japanese manufacturer are very expensive. For example, the model Sony KD-55A1 (55 inches) with implemented OLED-technology will cost $4000. A TV with a diagonal of 76 inches will cost $23000. Consequently, most buyers simply can not buy such screens, OLED technology is inaccessible for them.

Samsung uses a different technology – QLED (there are no OLED-screens Samsung as well as QLED-displays Sony). The essence of QLED – so called quantum dots (semiconductor nanocrystals that shine) in LED backlighting. It makes possible to expand the coverage of colors and increase the number of available shades. Also QLED screens may have a curved shape, which increases viewing angle and comfort level.

The photo shows a picture of both matrices. Photos open in full resolution while clicking.

It’s difficult to see differences in the quality of the image between the OLED and QLED displays, but it’s not possible for an ordinary user at all. But everyone will notice the difference in price. A good TV by Samsung with a 55-inch diagonal QLED-matrix is available on average for $1200-1500. The same OLED-screen from Sony costs $4000. That is, Samsung is 2-3 times cheaper. It explains the increased demand of South Korean brand and the wider use of televisions based on this technology. There are only some Sony models on sale, because people don’t buy them due to high prices.
By the way, if the OLED-screen by Sony with a diagonal of 77 inches costs $23000, then for less money ($20000) it is really to buy a Samsung panel with a diagonal of 88 inches.

It is believed that Sony with its OLED-matrix shows abetter picture, but it all depends on specific models. Some Samsung TVs show better results in terms of color rendering and are cheaper at the same time.

It’s about implementing the Smart TV function – it is even in inexpensive Samsung and Sony TVs. Koreans went their own way and came up with own OS for their devices – Tizen OS. And the Japanese resorted to the Google services and use the popular Android platform. 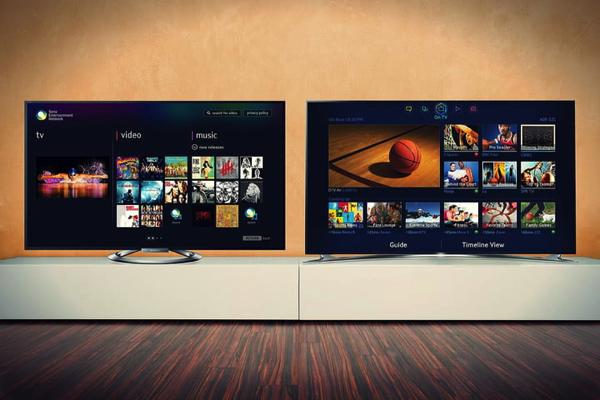 Here begins the complexity of choice. The thing is that Android TV is a “heavy” platform, which normally works with a powerful hardware, and it’s not customary to use high-performance processors and video accelerators in TVs. Also, the developers do not specify which components they install in a particular model. And if on an inexpensive panel installed a weak hardware, then Smart TV will slow down – so customer feedback about slow operation of this function. In addition, they put Android TV on most TVs from different manufacturers (not only Sony), which is why the optimization is bad. Well, the developer can not adapt one OS to completely different devices (by the way, the same goes for smartphones).

Samsung uses its own Tizen OS, which is characterized by optimization and adaptation specifically for the TVs of this brand. It increases the speed of Smart TV, but the functionality remains at the same level.

All this does not mean that Sony’s expensive panel will run slower, but the fact is that need to use more powerful hardware to run Smart TV faster. So Sony has to spend more money to buy expensive and powerful components. Samsung at the expense of optimized software can use less expensive hardware, which will reduce the cost

So in this plan, the South Korean brand is emerging, although this is a subjective opinion.

What in the end: who is cooler – Samsung or Sony?

Due to mass production and accessibility, the Koreans win the victory – they create a quality product that corresponds to the cost. It’s hard to say the same about Sony. Yes, maybe their OLED technology is better, and the Japanese screens show a deeper black color and picture, but this advantage is not worth the money they ask for their technology.