HDR means the High Dynamic Range. In televisions and cameras there is HDR technology, which allows to improve the quality of photos, pictures on the screen or video.

In the picture with HDR, the user will see more details in the dark and light areas simultaneously. The essence of technology is to make an image (in a photo or video) as natural and detailed as possible simultaneously in light and dark areas. An example is the human eye, which, after viewing a bright landscape, looks into the darkness – immediately it does not see many details that are hidden in the shadow, but after 20-30 seconds it adapts and recognizes small details. That is, the sensitivity of the eye increases many times after adapting to the conditions of illumination. HDR technology works like this.

Examples of images with HDR and without

The first frame demonstrates a clear example of a picture with an extended and normal dynamic range.

Obviously, with an active HDR, the image looks lighter – that’s what a person sees in real life. In the frame on the left, the details in the dark section are not displayed, so there the dynamic range isnt wide.

Left photo was made on a camera with a narrow DD. The sky is completely illuminated, although it should be blue. In the background, there are no details in the form of mountains and landscapes. The image on the right is performed on a camera with a wide DD or active HDR function – the result is obvious.

The picture below shows the result of HDR operation in TVs. Obviously, the picture on the right looks better. 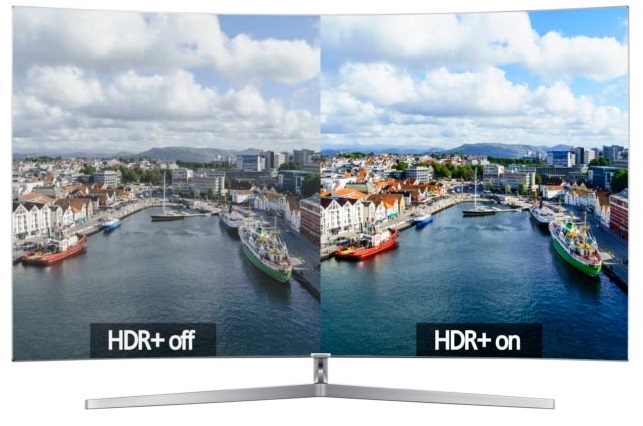 In this case, the best examples are selected, demonstrating images with HDR and without it. Not always the results are so obvious, sometimes it’s impossible to notice the difference, and in certain cases HDR even harms, transmitting an inaccurate color. For example, the red form of players on the football field can be “painted” in burgundy color or vice versa. So far, neither Samsung, nor LG, nor even Sony have made revolutionary changes, the technology of expanding the dynamic range does not always work well and accurately. This picture improver can cause the image to twitch or frisk, so many users turn it off immediately.

Not all TVs can play HDR-content, only new ones. Mass models with content support with the component HDR appeared in 2016, and today almost all TVs with 4K-resolution recognize and reproduce it. Of course, different models show HDR-video in different ways. 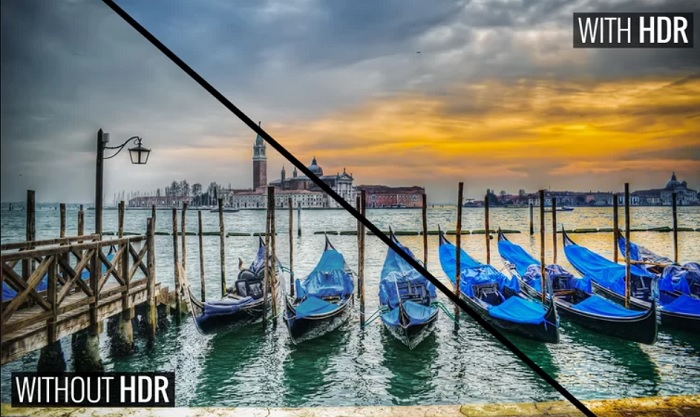 To achieve the ideal result and display a deep black color, you need an OLED screen with a resolution of 4K. In such TVs, individual pixels are dimmed or glow brighter when necessary. There are also LCD panels with a special LED-backlight, in which the LEDs in groups adjust the brightness of the areas of the matrix.

For proper playback of HDR content, the panel must have certain characteristics:

In cheap 4K-TVs, the brightness and contrast characteristics are low, there is no advanced technology for highlighting the areas of the matrix, so they can not correctly reproduce HDR-content. In addition, they are usually equipped with budget VA-matrices with a narrow coverage of color shades.