Before the introduction of the Galaxy S8 on the market, Galaxy S7 and S7 Edge were the best flagships in Samsung’s model line. Recently, the company introduced the flagship S8, which is already on sale and is in high demand. Even before the release and appearance on the shelves of shops, it was sold out on pre-orders. Is it good and what are the main differences from the Galaxy S7?

In fact, the Galaxy S8 is a device of a new generation that differs radically from the S7 with some parameters. Expected it will have better performance, better camera, display. Against the backdrop of these advantages, the difference in cost is justified.

Both displays in phones with SuperAMOLED matrixes, which are the best today. Not only in the Samsung phone line, but in general. Many manufacturers are trying to get it from Samsung, which is a kind of recognition of competitors.

The Galaxy S7 uses a 5.1-inch screen with a huge QHD resolution, and it was the best in its category until the Galaxy S8 was announced. On the bright sun there are no glints, no glare, there is a large margin of brightness for adjustment. The screen is contrast and saturated – everything is fine with this parameter. There is even a polarizing filter, thanks to which the contents of the display can be seen under the glasses with polarization. 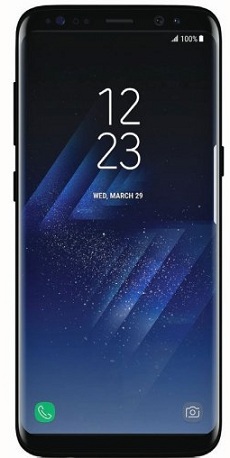 The Galaxy S8 received a new screen called Infinity Display. This term will be used for screens stretched vertically. If you use S7, and then pick up the S8, you will get the impression that you moved from a small monitor to a large plasma. The great matrix of the latest generation of SuperAMOLED is used here. This technology has been improved. In particular, the algorithm for adjusting the brightness on the machine became better, the Always On Display mode was also improved. Always On Display technology displays data on the locked screen: hours, date, missed calls or sms. It could just be some beautiful image. This is how it looks: 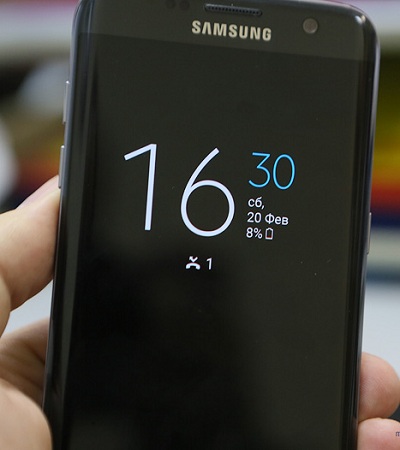 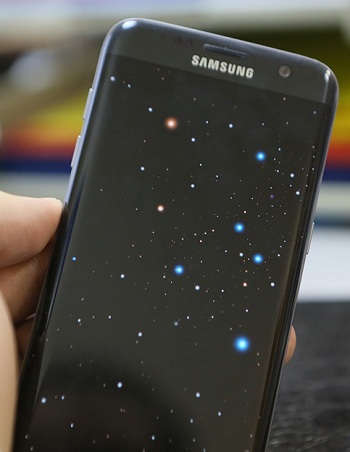 Known for its quality display studies, the DisplayMate gave its assessment to the Galaxy S8 screen. There experts considered that the company again managed to raise the bar and do the impossible. The English review is published in the official website of DispayMate. We recommend that you read. Briefly, we give the main points of their report:

These are not all the moments pointed to in DisplayMate. There are more of them, but we will not list all – it will be painful to write a lot of text.

Here’s an example: the S8 screen next to the S7 Edge display, which was ideal for color reproduction. But next to S8 you can see that the white color looks yellowish. 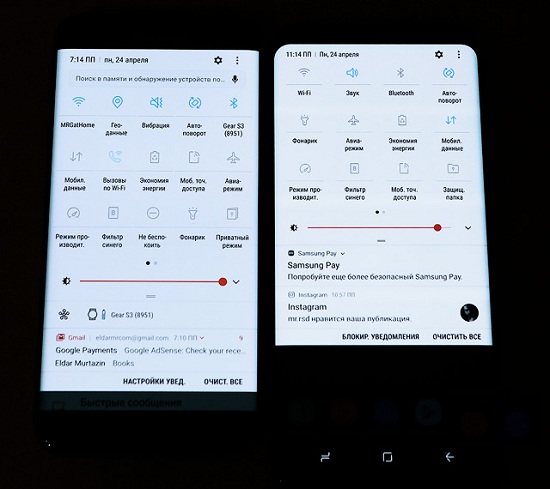 Also you can change the resolution from HD+ to FHD+ and WQHD+. Even at the highest resolution, the battery load is small. The display Galaxy S8 sets a record of the level of electricity consumption, and this at such a high resolution.

Conclusion: the display in the S8 and S8+ is revolutionary and it has no equal.

Smartphones S7 and S8 use the processors Exynos 8890 and 8895. These are chips of its own production. But also in both flagships can be used processors from Qualcomm – Snapdragon 820 and Snapdragon 835 in S7 and S8. Models with processes of Qualcomm are rarity. At all over the world there are flagships based on the Exynos processor, and that’s good.

The Exynos 8890 CPU in the S7 flagship is made using the 14-nm FinFet process technology. It has 8 cores and a coprocessor MALI T880 MP12. Prior to the release of the S8, the Exynos 8890 was the best. It has high performance, low power consumption and some technical solutions that were not previously implemented in any chipset.

However, the Exynos 8895 used in the Samsung Galaxy S8, has removed the crown from the Exynos 8890, and now the leadership belongs to the new chip. This processor is already implemented on 10-nm technology LPE FinFET, so its energy efficiency has increased significantly. The chip has a 64-bit architecture and 8 cores: 4 powerful 2.5-GHz Exynos M2 cores and 4 Cortex-A53 cores. It is optimized for machine learning, artificial intelligence, VR glasses and 4K content. The chip has also an ARM Mali-G71 MP20 coprocessor with 64 shader cores. This is twice more than has the best GPU of the previous generation(Mali-G71).

But let’s look at the “dry” characteristics and compare the performance of these chips. The performance rating of smartphones according to Antutu benchmark version will help us. In their official blog published a table of performance, which is relevant today (mid-2017), it looks like this:

So, in terms of performance, the Exynos 8895 chip significantly exceeds the previous Exynos 8890 CPU. But it cannot overtake the competitor from Apple. From the rating it is obvious that the flagship iPhone 7 Plus with the Apple A10 Fusion processor is gaining more points than the Exynos 8895. But other software (iOS) is used there, which was always famous for its excellent optimization.

It is all clear with Galaxy S7 camera. There is a good sensor Sony IMS260, optics with f/1.7 aperture, and great focusing technology DualPixel, due to which the focusing affects each pixel on the matrix. 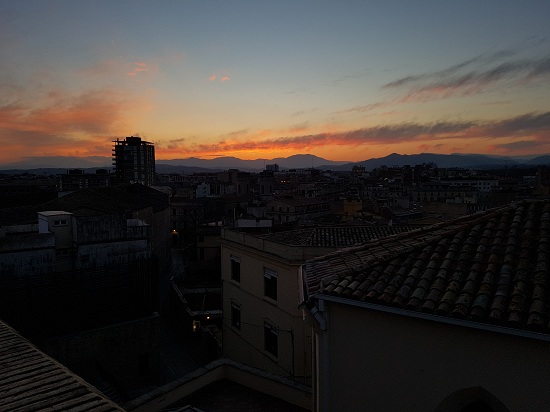 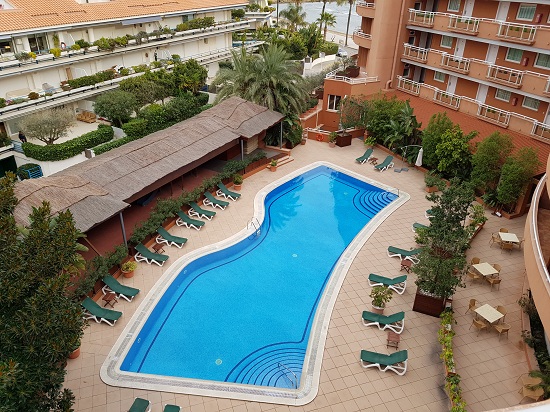 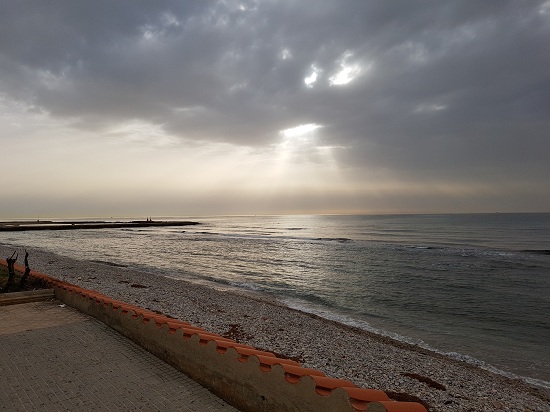 About the Galaxy S8 camera

The rear camera was not radically changed. This is the same 12 megapixel, DualPixel focusing technology and Sony’s sensor. But here the best processor and the performance has increased. Therefore, the camera now has its own memory, there is a Durst Mode, in which the user can make a dozen frames. The sensor focuses much faster, works with complex scenes (if to compare with the Galaxy S7 Edge). Also in S8 the multiframe technology is used: the phone immediately takes 3 pictures and chooses the best one. Some indistinct areas of the photo can be replaced by clear areas from another picture. That is, 3 frames are glued together into a single image, and due to this, high clarity is achieved. 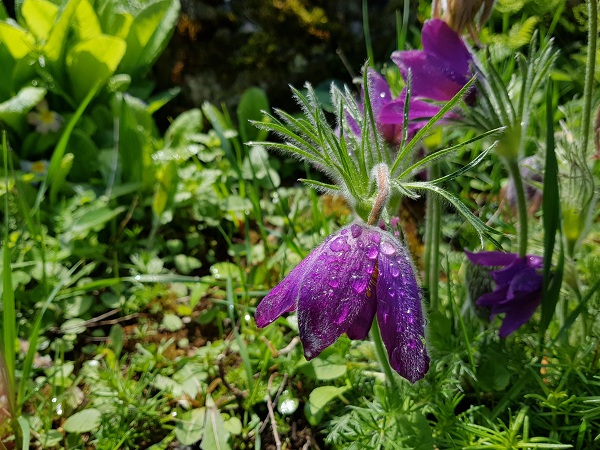 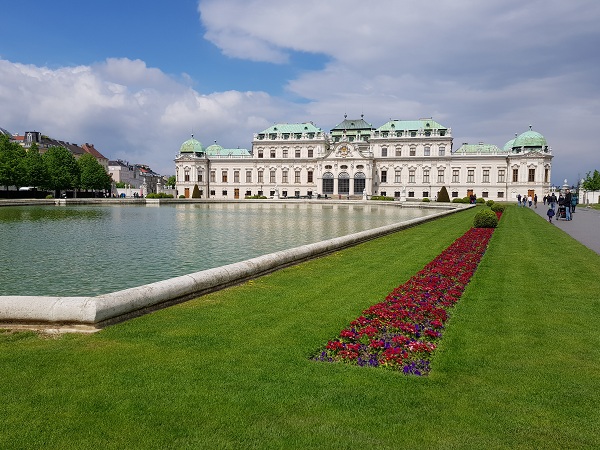 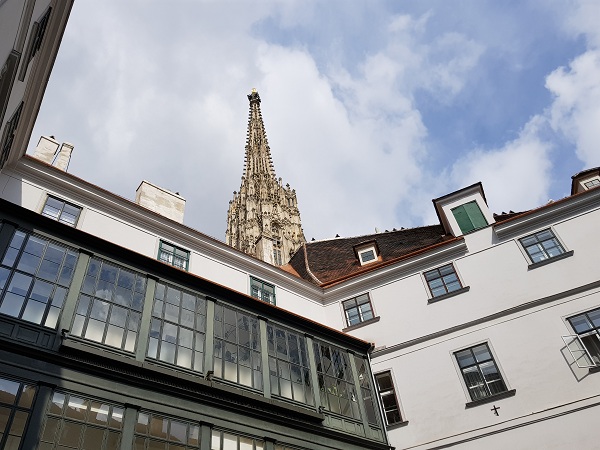 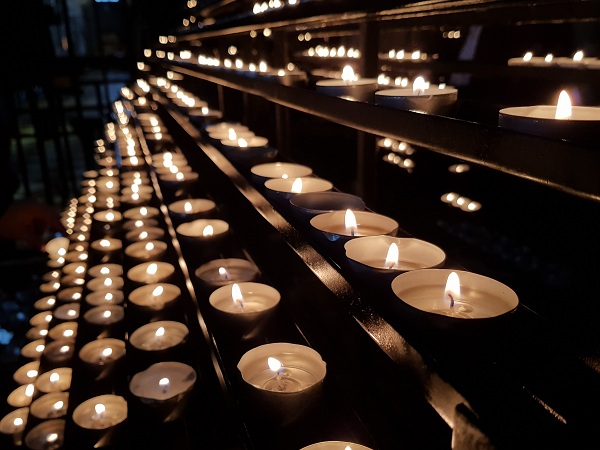 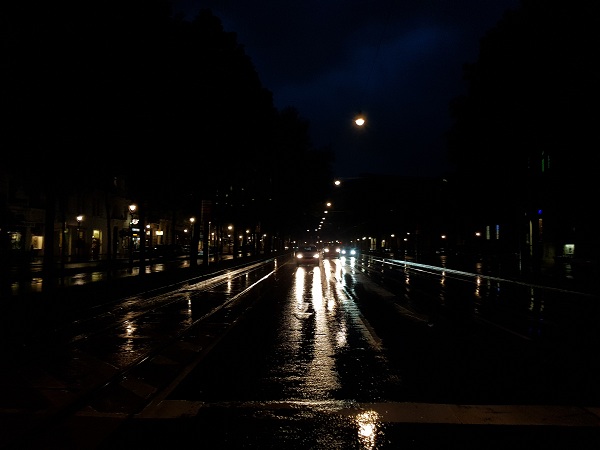 Pay attention to the last night photo. The dynamic range of the camera is inconceivably wide. Even in total darkness, clouds in the sky are clearly visible.

Model S7 with maximum load during the day runs from morning to night. It is desirable to put the phone on charge in the evening. You can even watch the video at maximum brightness for 14 hours. Charging to 100% is carried out within 90 minutes. A 50% charge “runs” in just half an hour.

S8 with a battery of 3500 mAh can play video 18-19 hours at maximum brightness. At maximum load, the device will “live” the whole day and two days with moderate. Improvements in terms of autonomy are compared with the predecessor (S7), but there is no grandiose breakthrough.

The question is not whether S7 or S8 is better. Galaxy S8 is definitely better because of its new processor, an unusual new screen, due to which marketers introduced a new term (infinity display), as well as increased autonomy and improved camera.

But this is not all. The iris scanner, the function of face recognition – those functions that are not in the previous generation of phones. Even Apple doesn’t have such technologies. S8 has fast charging, there is a wireless charging, cool sound chip and steep headphones are also used here. There is a DeX mode for working with huge screens, as well as support of virtual reality glasses. With the release of S8 Samsung flagships jumped to a new level.